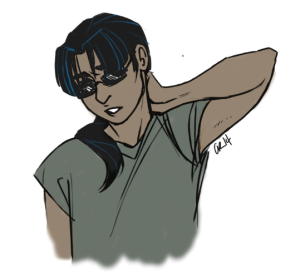 “I was eight when I was taken to the Watchers Bureau. We called it homework. Mom hated it but to my dad, it was something to be proud of… I was his son. I was supposed to take his place when he couldn’t lead the Order anymore.
It was just me and my dad… I was only eleven back then, but knew enough to take his place. We were there on a business trip when the first catalyst destroyed Ashwater. We were attacked. People were trying to get out, but they couldn’t. We were escaping in an Eider until there was a malfunction… and we went down. Into the city. I remember my father telling me to close my eyes. He started praying to God, or Buddha, or whatever… All those years of perfect obedience, and that one time I didn’t do what he told me. I didn’t close my eyes. I can’t help but remember the look on his face. It was the last thing I ever really saw. Then I saw nothing.”

All of the characters of PROJECT SERAPHIM went through their own unique transformation, but Tejinder Wakeman was among the most dramatic ones where I honestly took a step back and wondered, “What the hell was I thinking?”

For one, back when I first created this character in high school he was inexplicably a blond-haired green-eyed Caucasian. Not that there’s anything wrong with that, but with a name like “Tejinder” (originally shortened to just “Teji” at the time) it felt a little out of place. I think it was a product of him being inspired by a certain video game character (brownie points for anyone that can figure out who). It wasn’t until the second draft that he became blind, and by the third and final rewrite Tejinder Wakeman became the hacker dude he is today, and someone I feel a little more comfortable writing.

With a name like “Tejinder”, I thought it would make sense for him to be Indian-American. Evidently it means “god of grandeur” or “glorious” or something, which I guess is appropriate for him. “Wakeman” comes from his father, which is English in origin, meaning “watchful”, which is even more appropriate. The idea was to give him an Indian mother and an American father, so I dealt with the whole race issue halfway.

Even back when I, oddly enough, had an online reader base, Tejinder was probably the most popular character of my first two drafts. Maybe it was because, regardless of his changes over the years, he always had a consistent personality. I still like to think it’s consistent. He’s sarcastic, dry, but at the end of the day he’s still a rather good natured person and his relationship with Rey and their scenes were always fun to write. I don’t normally get to explore sibling relationships, so the scenes he shares with his little brother, Tamas, were interesting as well, and sometimes relatable for me to write about. Like many of the characters, he has rocky family ties that we’ll get to see more of as the story goes on.

Part of what makes Tejinder Wakeman “special” in the series is his mind. For instance, his was the only one capable of adapting to a surgical implant in his brain called the Mnemotechnic Serial Bridge (or “Bridge” for short), which is possibly due to him having been a survivor of the Ashwater Cataclysm, but no one really knows for sure.

The Bridge is a computer that was designed over a century ago by a Russian developer named Ivan Boryenka, and until Tejinder Wakeman came along there was no candidate capable of processing this technology. The Bridge gives Tejinder the ability to hook up his brain to any network, and process information that would take three dozen computer specialists to figure out.

Eventually the Bridge allows him to hack into systems remotely, but those details are on the down-low for now.

Although he’s legally blind, his eyes allow him to see things that are otherwise invisible to the naked human eye. Without his sunglasses, his pupils would exhibit a hint of tapetum lucidum, or eyeshine that is present in nocturnal animals with night vision.

His eyes come at a price, however. A condition called the Lux Caeco prevents him from taking off his protective shades. As a result of the Cataclysm, a type of degenerative cells are slowly traveling from his eyes to his brain. In the dark, the cells remain innocuous, while the cells are only active in natural and artificial light. To prevent the cells from activating and killing him, the sunglasses stay on.

Even without the Bridge and the eyeshine, Tejinder is something of a prodigy. He always has been. At the age of fourteen he was already graduated from high school, and finished with college at the age most kids were leaving high school. At twenty-three years old he was employed by the Western Order’s Programming and Engineering Unit, originally as a Coder, and later becoming the Archiver.

The Archiver is a position created specifically for Tejinder Wakeman. Because there is no one else with the Bridge who can process information as fast as he can, there is no other Archiver. Tejinder Wakeman is a one-of-a-kind animal, which is the idea I was going for when plotting out PROJECT SERAPHIM. There is no “Chosen One” who is designed to single-handedly save the world. Without characters like Tejinder, there would be no story, as his importance will clearly show as we delve deeper into the central conflict of the series.